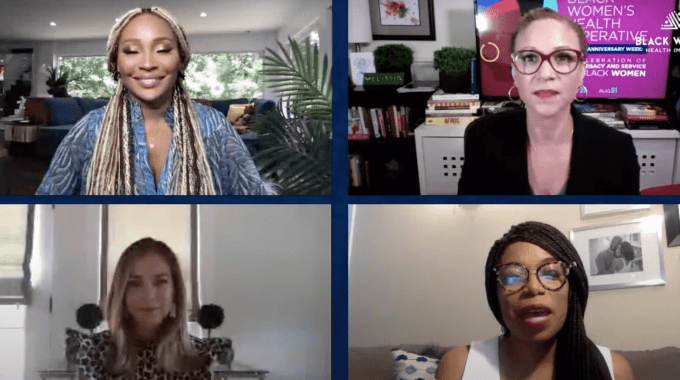 From July 26 through August 1, the Black Women’s Health Imperative (BWHI) held a series of virtual events, called BWHI Anniversary Week: A Celebration of Life, Legacy, and Service to Black Women presented by Bumble, to commemorate its 38th anniversary.

Responsum Health partners, The White Dress Project (TWDP) and CARE About Fibroids, played a special role in a fireside chat held on Thursday, July 30, called “Suffering in Silence: Our Fight with Uterine Fibroids.” Tanika Gray Valbrun, founder of TWDP, and Jenny Rosenberg, executive director of CARE About Fibroids, spoke alongside Cynthia Bailey and Melissa Harris-Perry on the topic of uterine fibroids—focusing on disease management, treatment, and black women’s lived experiences with fibroids.

Advocating for funding and support for women with fibroids

“It has been the norm for women to suffer in silence and for women to accept that there has been more funding and more research for men’s health causes,” said Rosenberg. “And there hasn’t been more of a voice for this cause, this issue, this condition, that impacts millions and millions of women.”

To help push for real change and fight for this women’s health issue, CARE About Fibroids mission is to “empower women and to educate Washington, D.C.—the policymakers and the people on Capitol Hill and agencies and departments who are in charge of research dollars to put them towards UF research,” said Rosenberg. “And to also encourage innovation in the pharmaceutical industry so that there are myriad options for women, so that it’s not just one or the other, where you’re either suffering or you’re getting a hysterectomy. Or you have to do so much research to find out that there are options in the middle.”

One such way that CARE About Fibroids supports women is through the new Responsum for Fibroids platform and app. “Recently, we’ve partnered with Responsum Health to create an app for women and an online community, and Tanika [Gray Valbrun, of The White Dress Project] is part of this as well,” Rosenberg stated. “[W]omen can go online, they’re on their app, and immediately have a community, information, [an] updated Newsfeed about research and innovation in fibroids, but [it’s] also…a way to keep up with their own symptoms, keep a log, so it is right there when they go into the doctor’s office. Because again, it’s about empowering women.”

A big win for the fibroids community

Amid this weeklong celebration, the fibroids community got great news in the form of the Uterine Fibroid Research and Education Act of 2020, a piece of legislation that was introduced by Senator Kamala Harris and Congresswoman Yvette Clarke to the U.S. Senate and Congress, respectively. This “is a huge step forward,” said Rosenberg, “but […] the community has to step up and make sure that there are more senators to support her bill, to make sure it gets through the Senate, to make sure that there is companion legislation in the House, and that we have a champion in the White House for women’s causes who will sign the legislation into law. […] We have to find leaders that are for women’s health and will put weight behind issues that will help women move forward.”

“I’m so excited about that because we are well on our way,” said Gray Valbrun. “But there was a time when people would not talk about breast cancer at all or lupus at all—and then we saw football players wearing pink cleats. […] It takes good storytelling, funding, and good marketing. With more people with influence, like Cynthia [Bailey], speaking up about it, then it doesn’t become this taboo topic. That’s what we really need to shift to. Fifty percent of the population is bleeding. Eighty percent of black women are suffering from uterine fibroids. We’re not alone ladies. We need to shift the conversation.”

Giving a voice to uterine fibroids

Throughout the 53-minute fireside chat, talking about fibroids—to other women, to men, to daughters, to other family members, to friends, to government officials, and more—was a recurring theme. “I didn’t grow up with a mom who felt comfortable telling me anything personal,” said Bailey. “I definitely made sure I broke that cycle with my daughter and anyone else who has time to listen to me go on and on about fibroids. […] We deal with a lot of stuff as women, we deal with a lot of things, and the most powerful thing that we can do is talk to each other, support each other, and have each other’s backs.”

Moreover, Bailey’s role on The Real Housewives of Atlanta has given her a large platform from which she can spread the word about fibroids—to not only start the conversation but also keep it going. “As a reality star, it’s great TV for me to really show you my real reality, and [fibroids] was something I was really dealing with.” Bailey went on to say, “For me, I felt like I almost had to talk about it on the show, because when you say you have the flu or whatever, no one expects you to come to work. If you say, ‘I’m bleeding really heavy because I have these fibroids,’ they don’t even know what you’re talking about. They’re like ‘We don’t even know what that is, girl. Put in a tampon and keep it moving.’”

Bailey’s message is clear, and as the fight for fibroids funding research and support continues, she continues to serve as a source of inspiration. “The more we have these conversations, the more people really understand what we’re going through,” said Bailey. “I am so glad that I have this platform to really speak about things that we’re not comfortable talking about. […] It was important for me to really just lay it out and not be prim and proper about it. This is a real situation, and I know I cannot be alone with this. Where are my other sisters who are out here bleeding with me?”

Want to learn more about other speakers and panels from the event? Additional information can be found on the Black Women’s Health Imperative’s anniversary page and blog.

Andy is the founder and CEO of Responsum Health. A former staff person for Senator Edward M. Kennedy on the Health, Education, Labor, and Pensions Committee, he has been a healthcare policy expert in Washington, D.C., for nearly two decades. In addition to his work for Responsum, he is co-founder of one of the nation’s leading healthcare policy firms, Thorn Run Partners.

World Sight Day 2020: Why and How to Get Involved

For at least two decades now, November has been recognized as National Family Caregivers Month…

To raise awareness about and eliminate period poverty and menstruation stigma, a youth-led nonprofit organization,…